Ant nest beetles (subfamily Paussinae) or paussines, some members of which are known also as flanged bombardier beetles, they are a large subfamily within the ground beetles (Carabidae).

Now if this has your attention, you might know that only 1 other ant nest beetle has ever been found in Mexican amber (this is from Chiapas).  The one holotype that 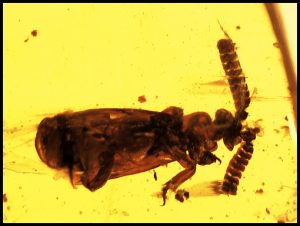 was found is also in rough condition.  This one is perfect - just as good as they get.  I found a pdf of a 2006 page on the 1 ant nest beetle from Chiapas.  Here is the pdf.  Now I cannot guarantee that this is a new species especially since I am not a beetle man, but it certainly could be.  This is a VERY rare and VERY unique specimen.

This 20-million-year old beetle  likely was able to live alongside ants -- preying on their eggs and usurping resources -- within the comfort of their nest. The fossil, encased in a piece of amber from Chiapas Mexico. This is the oldest-known example of this kind of social parasitism, known as "myrmecophily."

If you ever wanted something that no one else has, you are now at the right spot.  The amber is clear, perfectly yellow and contains the full animal.