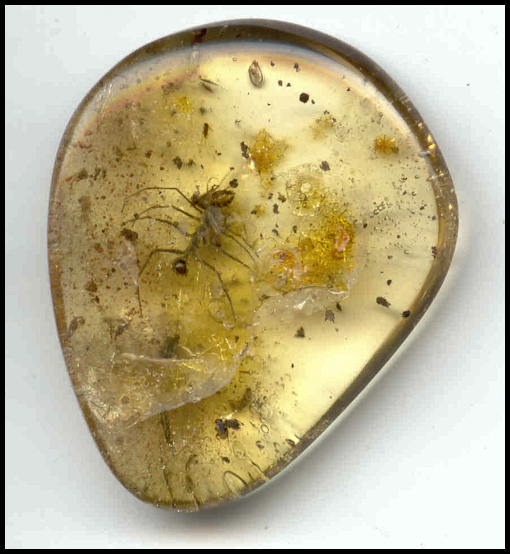 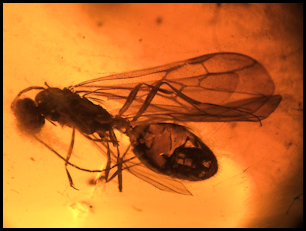 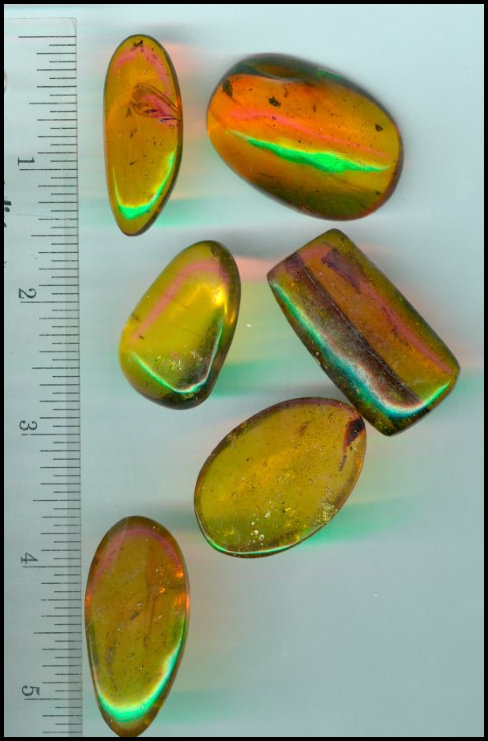 A spider that wants to be a fake ant.  This is Colombian copal - not regular amber.   If you are into spiders - this is unique. Here is the piece. You will never find a cooler piece than this. Look at the image - looks like an ant, eh? Now count the legs - this is a spider, Araneae. It is an ant mimic spider. Talk about evolution at its best. This spider has evolved to look like an ant so it can pass itself off and eat what it looks like. The best example of animal mimicry that I have ever seen. This is one for everyone's collection.

A busy piece.  This contains a rather large immature planthopper, Homoptera, Fulgoridea.  It shows some good details.  In fact, the picture on the left reminds me of the movie, Aliens.  There is a rather transparent worker ant  and good caddis fly, Trichoptera.

We have a small number of Dominican amber collections. Each of the collections has about 5 to 26 pieces in it. They are all good sized and all contain small insects. (Each piece does have an insect in it.)  If you click on the picture image, you will get a larger picture of each collection.

These collections (of which we have about 20) are not good if you want huge and easily visible insects. What you see are the actual pieces you will receive. These are medium pieces and the insects are proportionally sized. Perfect for a class set so kids could go exploring. Perfect to give away to a group. Good to have in a drawer and hand to someone who wants to just have fun. 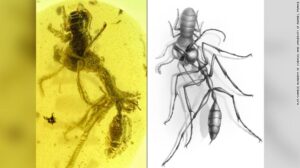 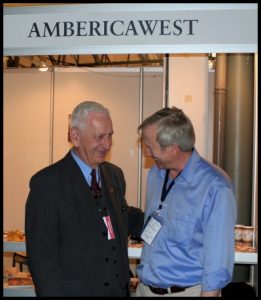 A picture of the late Wieslaw Giertowsk in Poland and Doug Lundberg.  Mr. Giertowsk is probably one of the most respected amber individuals in the world.

Scientific American, February 2020, had a picture showing the land continents with major ‘discoveries’ (page 20).    One arrow pointed to Brazil and under that, it said:

“Despite the long dry spells in Brazil’s Caatinga region, scientists found the tree Hymenaea cangaceira drizzles copious nectar from flowers to attract pollinating bats: a full-sized tree can release 240 gallons of the stuff, with 38 distinct scent compounds, over a single dry season.”

Here is the reason for this inclusion on this amber page.  Hymenaea is the tree in New Zealand that produces copious amounts of resin that is called ‘kauri gum’.  Not sure about this relationship, but if I am a betting person (I am), I would put money that there is a direct relationship between the flowers and resin production.

A new page with some cool items: https://www.ambericawest.com/cabs-2/