This is a strange group of insects. Most species are described solely  from the males because most of the females are devoid of eyes,  antennae, legs and external genitalia and they live their life in the  host. They prey upon solitary bees, solitary wasps, and true bugs  mostly.The female is mostly flightless and are degenerate in that she  has no legs and a body that looks rather like a maggot. The males  have only one pair of functional wings, and these are the hind wings, the fore wings are greatly reduced to look and function like the halteres of flies. Even for today, they are not that common and few people other than entomologists have or are likely to see them.

The name of the group is derived from the Greek words for twisted (streptos) and wing (pteron) and refers to the peculiar twisted wing of the male's hind-wings while in flight. 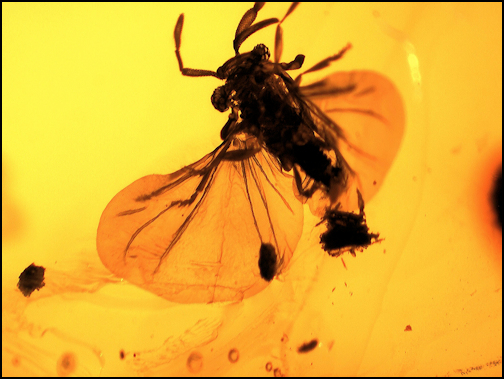 They are rare in both Baltic and Dominican amber. The number of specimens from the Baltic can be counted on one's hands and toes! They are rare and found mostly in museums (if at all).

This particular specimen is in perfect shape. The Twisted Wing almost looks like he posed for us when he died. It is a remarkable piece of amber. You can see all the important characteristics of the animal. 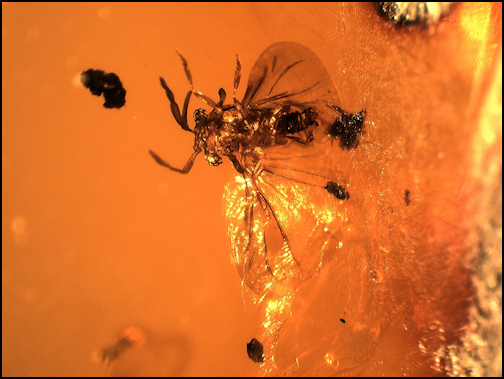 We offer here, one beautiful Strepsiptera. This particular one is probably a parasite on bees. The amber is good, about .3 inches X .3 inches x .5 inches. While we do sell the unusual, this one really takes the cake. You will not find a Strepsiptera anywhere else in the world for sale (really)!

Science magazine ran a one page article on Strepsiptera (January 2005)! Here is the article as a pdf.

Scanned image of the amber piece.