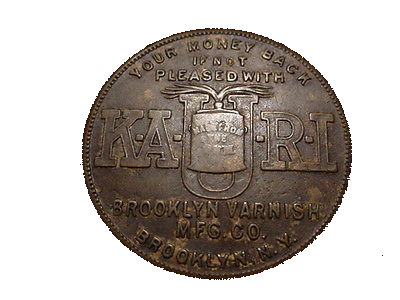 I have for sale a 20th century, before 1940, advertising token from the Brooklyn Varnish Mfg. Co. of Brooklyn, New York. The token looks to be copper or bronze and was gilted when new with a very small amount of gilt still showing.

The token is 1 1/4 inch in diameter and in circulated condition. The obverse reads YOUR MONEY BACK - IF NOT - PLEASED WITH - KAURI - BROOKLYN VARNISH - MFG. CO. - BROOKLYN, N.Y. The U is in the background of a can shape. The can is very weak but you can read some of the letters & I think if it was clear it would read MADE FROM - THE - GUM. On the reverse at the rim it reads MEMBERSHIP EMBLEM OF THE DONT WORRY CLUB - GOOD LUCK. In the center it shows several good luck symbols including the large Indian good luck symbol.